Özet: In this new period drama, the clothes have their own character arc. “The costumes really reflect what’s happening inside Colette,” says the director.

Keira Knightley wears several striking outfits in the new period drama "Colette," but the director Wash Westmoreland's favorite fashion moment in the film has nothing to do with the character's jaunty straw hats or menswear- inspired ensembles.

Instead, Mr. Westmoreland said the key to "Colette" comes just as Ms. Knightley's turn-of-the-century title character prepares to meet the men and women of Parisian high society, then idly notices a toothpaste smudge staining the bust of her dress.

"It's a comment on the philosophy of the movie," Mr. Westmoreland said in a phone interview. "Yes, it's a costume drama, but the costumes have stains on them because the people have real bodies. And real bodies make a mess of things."

Though she was a fashion icon in her day, Colette surely would have appreciated that subversive spirit. She is now best known for writing "Gigi" and "Cheri," but Mr. Westmoreland's film tracks Colette (1873-1954) long before she became a famous author in her own right, when she was just a young girl plucked from the Burgundy countryside by her showboating new husband Henry Gauthier-Villars (played by Dominic West) and plopped into Paris. There, Colette labored in secret to produce novels under her husband's nom de plume, "Willy," but chafed at his controlling nature and expectations that she should be a pliant society wife.

At first, he dismisses the decidedly feminine stories that Colette comes up with: Though they are drawn from her own coming of age, this chauvinist can't fathom that anyone would care about a girl's innermost thoughts. But once Colette's novels are published under Willy's name, they become best sellers, and as Colette becomes more dissatisfied with her husband and tries to claim the credit he denies her, Mr. Westmoreland has Colette express her rebellious spirit through a series of increasingly androgynous looks. Who really wears the pants in Colette's household? Take one look at Ms. Knightley in a smartly tailored men's suit, and you can guess the answer. 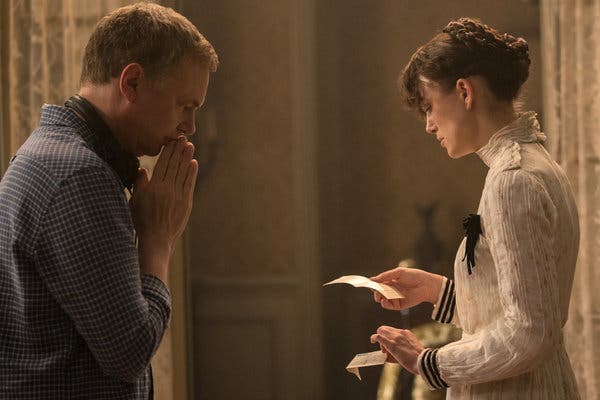 The director Wash Westmoreland with Ms. Knightley on the set of "Colette."CreditRobert Viglasky/Bleecker Street

"Colette goes on quite a journey on this movie, and the costumes really reflect what's happening inside her," said Mr. Westmoreland, who began working on the film's screenplay more than 15 years ago with his partner, Richard Glatzer, who died in 2015. Colette was one of France's most photographed women, and every new picture Mr. Westmoreland found of her stoked the men's interest further.

"In the early versions of the script we circulated, we thought her looks were so jaw-dropping, and the poses she struck in them were so extraordinary," he said, "that we would put photo inserts in the script to show what Colette looked like in each of these phases in terms of her costumes, her hair and her attitude."

Reproducing those outfits was no easy task. "Nowadays, even if I want to make a costume of that era, the fabrics and colors don't look as they did then," said the costume designer Andrea Flesch, who spent a year searching costume houses all over the world to find garments with the right texture. "Modern fabrics just don't have that feeling anymore of looking almost like paintings."

"You can't put people in a white shirt from the Gap," agreed Mr. Westmoreland. "Even if it just looks like a white shirt and there's a fancy suit over it, it's not right. It has to be something that's heavy and hand-stitched and of the time."

Still, for all of that verisimilitude, there was one crucial difference that set "Colette" apart from the many other costume dramas Ms. Knightley has made, like "Anna Karenina" and "Pride & Prejudice." "The joke is that Keira's always in a corset, but she wasn't in a corset in this movie," Mr. Westmoreland said. "It was really important that Colette always had this freedom of movement."

When we first meet Colette as a young girl in Burgundy, she is wearing a yellow country dress, snugly fitted to give her that suggestion of athleticism. "From the beginning, I wanted to put a little hint of masculinity in her costuming -- something a little tomboyish," Ms. Flesch said. Even after she marries and moves to Paris, Colette resists wearing the expensive, stifling dresses her husband has set out for her, instead opting for high- waisted garments in black and white.

"The rest of the Parisian salon would be dressed like a flock of butterflies -- colors, ruffles, bejeweled outfits -- and she just cut through them because she was wearing something simpler and more modern," Mr. Westmoreland said. "They still gave her the side-eye for what she was wearing, but in time, they would all copy her."

Later looks would prove even more daring. After Colette begins an affair with the Marquise de Belbeuf (Denise Gough), who presents as male and coaxes Colette to extricate herself from Willy, Colette returns to her husband wearing a man's suit and a confident swagger.

"In Paris at that time, a woman could actually be arrested for wearing trousers," Mr. Westmoreland said. "It defies convention, and it's sort of a queer statement that she's stepping out of conventional feminine norms."

Once Colette subverts expectations all the more by giving up her high-society life to pursue work as a stage actress, she engineers a fashion moment so shocking that something similar would scandalize the Super Bowl a century later. For the play "Flesh," Colette had a garment specially made to detach and reveal one breast.

"You see these amazing photographs of Colette in 1907 showing this left breast bravely on the stage," Mr. Westmoreland said. "It was a time when people still debated whether you should show an ankle, so she was unbelievably fierce and out there."

Style was not a frivolous matter for Colette: It was a way to express who she was and how she felt to a society that often sought to deny her those things. "Fashion has a creativity that is more associated with femininity than masculinity," Mr. Westmoreland said. "It's all the things that Willy was dismissive about Colette's literature for."

With his film, then, Mr. Westmoreland hopes to show how fashion is so much more than meets the eye. Just don't expect him to take after his heroine when it comes to matters of style.

"I dress like a grip," he laughed. "I'm there on set in an oversized T-shirt. I want absolutely everything to be of the time period … but that doesn't include the camera, or me."